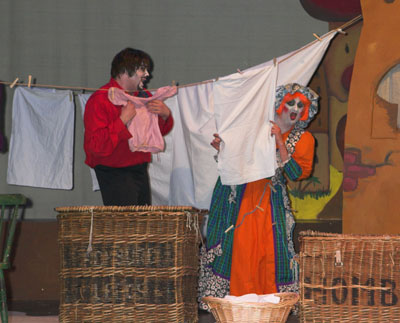 Scene One – The Cave of Wonders

The curtain opens to a dark and spooky scene with theCaveofWondersa fixture on the front of the stage, dried ice, scary music etc. Two figures in black come up through the isle with torches this is the evil advisor to the Sultan, Abanazar and his comic assistant Abdul. They have been seeking the Cave for years for with in the cave is a magic lamp that has a Genie in it, the holder of which would be the most powerful man alive. Abanazar attempts to enter the cave but the cave quickly tells him that only one who is pure of heart can enter the cave. The cave shows them the one who may enter, through the gauze we see Aladdin in the village square.

An opening number follows “One Jump” (Aladdin Soundtrack) after this we meet Aladdin and his two sisters they are school girls with Dublin accents, a comedy duo named Wishy and Washy they live to torment Aladdin. Next we meet Al’s mother the much put upon Widow Twanky (Dame) who runs the village laundrette.

Into this comical scene come the Sultan and his beautiful daughter Jasmine and Abanazar and Abdul they enter in a grand Arabian parade, Musical number – (Arabian Music) with soldiers, dancers etc. the Sultan is carried in on a throne.

When they leave we find out that Al and Jasmine are very much in love, in secret as it is law that she can only marry a prince. At the end of this scene Abanazar recognises Aladdin as the one who is pure of heart and makes a plan to disguise himself and win the heart of the Widow Twanky to gain Al’s trust and get him to go into the cave and get the lamp for him.

Scene three opens in the laundrette, Musical number “Working nine to five”(Dolly Parton) as they all go about their work.

Abanazar and Abdul sneak in Abanazar is disguised as a “Tom Jones” type character. They here the Widow coming and hide. Then Abanazar jumps out of a laundry hamper and seduces the Widow to the song “Good looking Woman” (Joe Dolan). After the song they end up in the house together. Lights down.

Al and Wishy and Washy come in, then Abanazar comes out looking a bit shook after seducing the Widow he tells them that he is a poor man and all he had in life was an old lamp that was very special to him but an evil sorceress took it from him and throw it in a magic cave and if only he was young and strong he could get it back. The Widow volunteers Al to go and he agrees so Al and Abanazar head off for theCaveofWonders. Musical number – “Holding out for a Hero”(Bonnie Tyler)

Scene Four – The Cave of Wonders

Al is permitted to enter The Cave of Wonders, but when he tries to bring the lamp out the mouth starts to close and Abanazar tries to take the lamp but Al won’t give it to him so he pushes him back into the cave and it closes trapping Al forever.

Trapped and alone or so it seems until a very unusual old man appears his name is Crazy Old Jim and he has been stuck in the cave so long he is absolutely nuts!   Crazy and all as he is Jim does come in handy because eventually he tells Al that the old lamp is magic and all he needs to do is rub it.  Al rubs the lamp and The Genie appears and does a big Musical number “Mr Wonderful” (Wicked the musical). The Genie is a stand up comedian, after the song he tells Al about the three wishes and they become friends and for his first wish Al wishes to be a Prince so he can marry Jasmine and his second wish is to get out of this cave.

Abanazar enters with Abdul he is very angry that he has lost the lamp. He comes up with an evil plan to make a change to “The Great Book of Law” that will state if the Princess is not married by her eighteenth birthday which is quickly approaching that she must marry the Sultan’s Royal Advisor, that is Abanazar.

Then the Sultan and Jasmine come in they are meeting suitors for her hand in marriage today but it has not been going very well. Abanazar then informs them of the new law. They are about to give up and agree to marry Abanazar when Al and the Genie come in, Al is a prince now and the genie his is assistant. Musical number – “Prince Ali (Aladdin soundtrack)

Abanazar unveils Prince Ali as Aladdin a lowly gutter snipe but then The Widow Twanky comes in and tells everyone that Al is in fact royal blood following on from a wild affair she once had with a royal.

The Sultan is delighted and gives his daughters hand in marriage to Aladdin and everyone is overjoyed. Abanazar loses his temper and storms off vowing his revenge.

Al, Jasmine, the Sultan and Wishy and Washy head off to plan the wedding leaving The Widow to do a bit of spring cleaning. Suddenly Abanazar arrives back on the scene in another clever disguise this time as a rag and bone man and he tricks The Widow into giving him the old lamp. She gives it to him and now Abanazar is all powerful Al and the others come back on but are helpless as Abanazar celebrates.

Musical number – “Like a Bat out of Hell” (Meatloaf)

Scene One – The Sultan’s Palace

Act two opens with a Musical number – “It’s a kind of magic”(Queen). After the opening number we see that Aladdin, The Widow, The Sultan, Wishy and Washy are all in a big cage. Abanazar is on the Sultan’s throne, Jasmine is chained to the throne. Abanazar calls the genie, he gets him to banish them all toAntarctica. Which he does as a magic trick vanishing them all on stage. After they’re gone Abanazar and Abdul plan for the wedding of Abanazar and Jasmine.
Scene Two – Antarctica

There is what looks like a tent on stage but it turns out to be a huge pair of knickers under which sit, Wishy and Washy, the Sultan and the Widow Twanky they are cold and miserable, then Johnny Logan comes in and sings “Hold me now” (short music gag) after that they go off to look for help. The Widow and The Sultan are left alone she tries to seduce him but then notices he is frozen solid after she revives him we see a love ignite between The Widow and The Sultan and they sing “A Whole New World” (Joke version.)(Aladdin Soundtrack) This is interrupted by the others (Wishy, Washy and Aladdin) entering screaming, something is after them.

They all hide in the knickers (tent) in fear, shining a big torch around when suddenly a very scary Abominable Snowman appears, they all scream.

The Snow Fairy Dolores is lounging on an ice Chas lounge a small non speaking Eskimo named Emo waits on her serving her sherry she is very dramatic and depressed. It turns out she is depressed because her one true love vanished and left her broken hearted she unveils a picture of him and it is the Genie.

She sings a song “I’m all Alone”(Spamalot)  During the song The Abominable Snowman enters with the others he introduces them all to the Dolores, but she is reluctant to help as she is retired and doesn’t feel she’s able to perform magic anymore. But then she sees how sad Al is cause he is in love with Jasmine.

Dolores then reveals that she was once in love herself with a wonderful magical Genie.  They all then realise that it’s the same Genie they know and so they tell her if she can get them back to the palace inArabiashe can come too and be reunited with her true love.  She is afraid as her powers are very old and worn and she doesn’t think she can do it, and then Emo runs on with a magic flying carpet she owns.

Al sets off forArabiaon the magic carpet telling the others he will send it back for them. Musical Number – “Defying Gravity” (Wicked)

The Genie is trying to cheer up Jasmine; when Al comes in Jasmine is overjoyed to see him and then he introduces the Snow Fairy and she and the Genie are reunited.  The Genie and Snow Fairy sing “The Song That Goes like This” (Spamalot) after this the others all crash onto stage on the magic carpet.

They are all on stage coming up with a plan when Abanazar enters. The Snow Fairy and Abanazar have a magic fight with her trying to free the Genie through magic and Abanazar trying to control him. In the end with the help of the audience the Snow Fairy wins and the Genie is free. They all celebrate but Abanazar won’t give up, he grabs Jasmine and runs off. A good old fashioned Chase Scene follows at the end of which Abanazar is once more defeated.

And in true Panto fashion – “They all life happily ever after”