Beauty and the Beast – Synopsis

This is the Panto version of the magical story of Beauty and the Beast. It’s not the Disney one so there will be no talking clocks or teapots.

The original story of Beauty and the Beast was written by a lady called Madame Leprince de Beaumont in 1757 and this version, the Panto version, is adapted from her original story and goes a bit like this with a few surprises thrown in along the way.

In a small village somewhere in France, there was a young man named Billy, Billy is Belle’s best friend. Belle is our heroine, a young dreamer who lives with her vain sisters Belinda and Bettina and her father Bertram the inventor.

There is a big inventor’s festival and competition and Bertram’s main rival for top prize is the richest man in the village Baron Barnaby Badass.

The Mayor of the town launches the festival and Belle’s father wins and is selected to represent the village at the national competition in the city. The Baron and his wife, Baroness Beatrice, are not impressed and plot revenge. As Bertram and his horse Sherbet head of to the city. His daughters put in requests for all kinds of presents but all Belle wants is a single rose.

On the road to the City the Barron and his wife plan to make sure Belle’s father doesn’t reach his destination. They plot, as Bertram arrives on the road lost. Baron Badass then comes in disguised as Bertram’s Fairy Godmother and directs them down the wrong path.

Belle’s father heads off down a road that leads to the Beast’s castle.

At the gates of the castle we meet the Beast’s Gardeners Jock and Jessie, and the butler Marcel. The gardeners are tending the beautiful and magical roses that surround the Beast’s castle. Belle’s father Bertram and Sherbet arrive on this unusual garden. He sees

the beautiful roses and picks one for Belle as promised. The Beast arrives on the scene and is furious, he tells Belle’s father that he is now his prisoner. The old man begs to at least return to tell his daughters what is happening and then he will come back, the Beast agrees and lets him home for twenty four hours.

Bertram and Sherbet return to the village, he tells everyone what has happened. When he goes inside Belle decides that she will take his place as the Beast’s prisoner and gets Sherbet to take her to the castle.

Belle arrives at the gates of the castle and meets Marcel, Jock and Jessie. Then she sees the Beast in the shadows who agrees to take her instead of her father.

As act one ends Belle enters the castle.

Act two opens with Jock and Jessie who tell us that time has passed and we learn that the Beast and Belle have become friends. They are meeting for dinner that night and the Beast is planning on asking her if she can love him. After dinner the Beast notices that Belle is not truly happy as she misses her family and releases her.

Meanwhile back at the village The Baron and his wife have been plotting and have decided that if they could get rid of the Beast they could take over his castle and have his wealth. Discussed again as The Fairy Godmother The Baron convinces Bertram to lead them to the Castle. Billy and Belinda and Bettina arrive on the scene and they follow them.

They all arrive at the castle to save Belle, but does she really need saving? Will the beast find true love? Can Belle’s dreams come true? Or will the evil Baron and his wife win the day?

Let’s find out together as we adventure into the tale of Beauty and the Beast – The Panto! 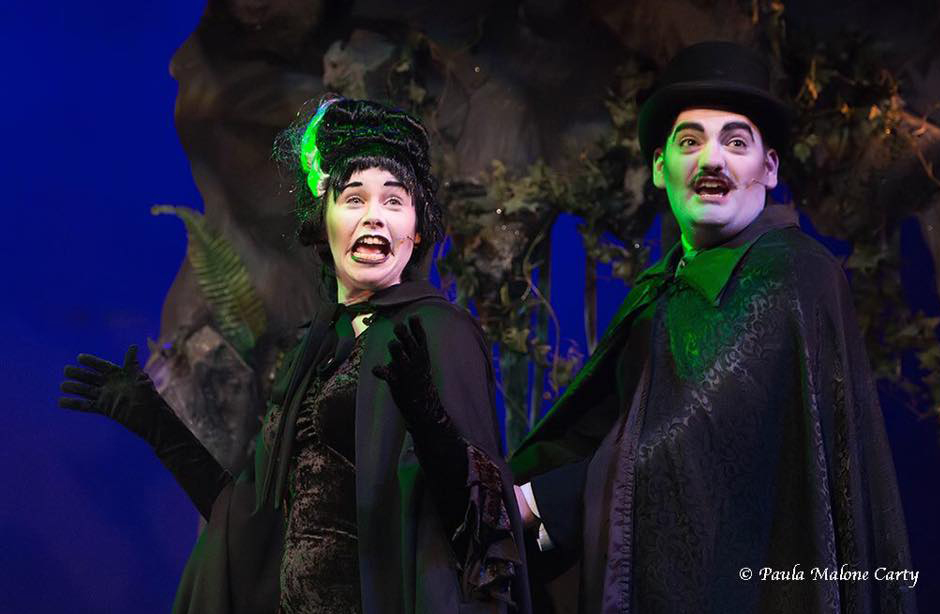