The show opens with a framed picture on stage of the Prince placing the glass slipper on Cinderella’s foot.

The Curator of the Museum of Magical Fairy-tale Memories enters and begins our story, he talks about dreams and wishes coming true and how these kind of pictures can be achieved. He then introduces the show, the picture fades and Cinderella and the Prince stand alone. Opening number.

We are in the village square. It is a busy market day and villagers and children mill about doing their daily business and playing. Buttons addresses the audience tells everyone who he is, he is the only one who directly talks to the audience. He introduces Cinderella or Ella and then the Evil Stepmother and Ugly Sisters burst in they are on a shopping trip to town, Ella runs and hides, after a while the Ugly Sisters and Step Mother leave. Enter Benjamin, Barney and Sid the royal aides to the Prince followed by Dandini the Royal Advisor to the King. They are desperate to find the Prince who has absconded from the palace, they split up to find him.

The Prince sneaks in one way and Cinderella sneaks in the other way they both wear cloaks with hoods up as they are in hiding. They meet in the middle and a magic moment of love happens.

The Ugly Sisters enter with the Evil Stepmother, the Stepmother reprimands Ella, the prince stands up for her and The Stepmother brushes him aside thinking him a peasant. The Prince reveals himself and the Stepmother apologises as Ella fleas. The Royal Aides and Dandini arrive on the scene.

Dandini again explains to the prince that he cannot be out among the peasants, the prince talks of Cinderella but Dandini laughs it off saying he will marry a lady of quality.

After Dandini leaves the Prince talks to his aides about Ella and how he is in love. He sings a song to end the scene.

Prince Will sails onto stage, he is floating on air, madly in love. He is accompanied by his aides. After a bit of chat about love and all their wonderful past experiences Dandini enters and announces the arrival of the King and Queen.

The king is not happy with the prince for absconding from the palace again. Will speaks of the girl he met and the King immediately reminds him that as a prince he cannot just marry any common peasant. Will argues and as his father loses his temper his mother the Queen intervenes and suggests that they hold a ball and all the eligible ladies in the kingdom be invited. Will agrees but he sets his aides the task of delivering an invitation to every girl in the kingdom to make sure they find his mystery girl from the village.

Scene 3 – The Kitchen of Cinderella’s House

Cinderella, her Ugly Sisters and Buttons enter. The girls are giving out to Cinderella for what happened in the village square, Buttons is standing up for her. The Wicked Stepmother enters and the others leave, she talks to Cinderella and tells her that she can never leave the house again.

After she leaves Cinderella cries and Pippa the cat comes to her and soon Buttons arrives and between them they cheer up Cinderella.

Scene 4 – The Front door of the house – The Princes Aides arrive they are delivering invitations to the ball. They are meet by the Ugly sisters and Stepmother who tell them that there are only three ladies living in the house. After they exit Buttons sneaks in and gets an extra invitation for Cinderella.

Act two opens at the ball where everyone is enjoying themselves except the Prince because he cannot see the girl he loves anywhere. The Prince’s dreams come through however when the beautiful Cinderella arrives at the ball. The Prince and Cinderella dance all night.

Glitter Knicks arrives at the ball, she forgot to tell Cinderella that the magic wears off at midnight. Panic ensues as the clock strikes twelve bells and Cinderella fleas from the ball leaving only her glass slipper which the Prince finds and states that he will try this slipper on every girl in the Kingdom and the foot it fits shall be his wife.

Scene 2 – The Kitchen of Cinderella’s House

After the chase the slipper is fitted, the Prince recognizes Cinderella and true love wins the day, the Fairy Godmother appears and awards Glitter Knicks her Fairy Godmother licence and everyone lives happily ever after.

All our friends are at the Palace for the wedding of Cinderella and the prince.

And thus we wrap up the magical story of Cinderella. 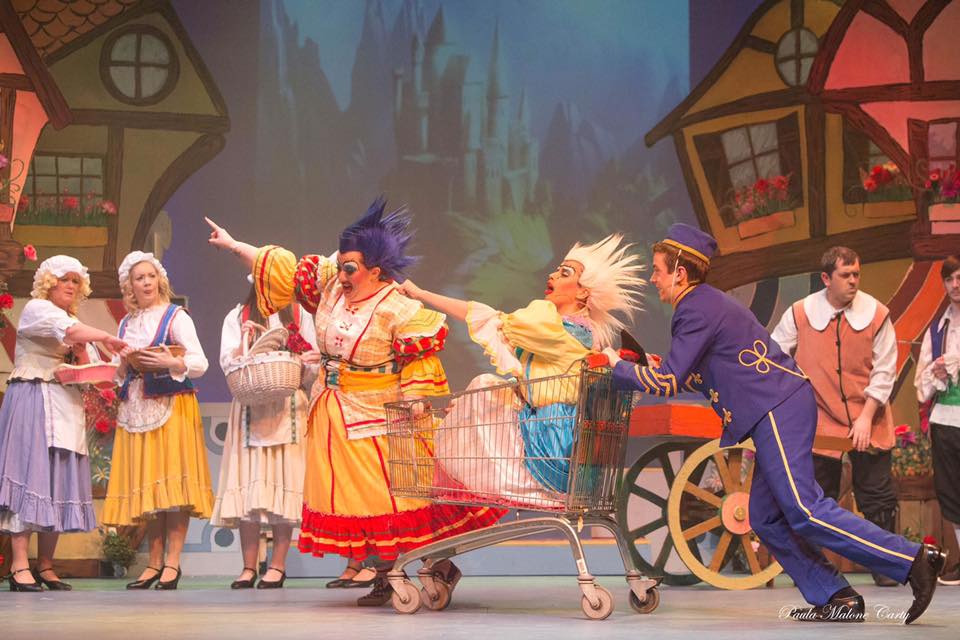