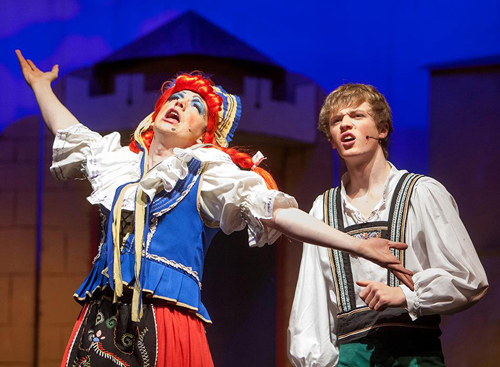 This is the magical story based roughly (very roughly) on a legend concerning the departure of a great number of children from the town of Hamelin, Lower Saxony, Germany, in the Middle Ages.

Our magical story begins the day Hans our hero and his mother Frau Kinderflapping arrive in the town of Hamlin to fill the post of Nanny to the Mayor of Hamlin, Mayor Borris Maxamillion. They are greeted by the Mayor’s two right hand men Councillor Helmut Stinkinpopper (FG) and Councillor Herman Poopenhagen (FF) and meet the Mayor’s three children.

The Mayor’s oldest daughter Lena is very beautiful and Hans immediately falls head over heels in love with her. She is not as interested at first but who knows how she’ll feel as our story develops. Frau Kinderflapping takes up her post as Nanny to Alex and Andrea, Lena’s two younger siblings.

Everything seems happy in Hamlin but lurking in the sewers below the town an evil Rat Queen and her two sidekicks Nibbles and Scratcher are bored and hungry, when suddenly a strange Pied Piper appears in their midst. He tells them that he has a plan to get all of Hamlin’s gold and he needs their help. As the Rats and the Piper plan and plot we return to Hamlin town.

In the town the councillors are having a very important meeting about where they will go for lunch and other such important things. (Watch out for some very special guests in this scene!) Later in this scene the council chambers is suddenly and unexplainably invested with rats. The rats take over and evict the Mayor and all our friends into the streets of Hamlin.

In the village square the town’s folk don’t know what to do. The mysterious Pied Piper appears he tells the Mayor that he can get rid of the rats for a price, they have no choice but to agree and the Piper plays a magical tune on his pipe that leads all the rats away. There is much celebrating but it is short lived as the Piper returns for payment. The Mayor refuses to pay him the agreed price. The Piper is furious and raises his pipe to his lips and plays a new tune that hypnotises all the children in the village, as the act ends the Piper leads away all the children of Hamlin town.
Act two opens in the sewers where all the children are held prisoner by the Rat Queen. Her rats Nibbles and Scratcher accompany the Piper back to town to tell the Mayor that they want all the towns gold if the people of Hamlin ever want to see their children again.

When this news is delivered to the townsfolk all hope seems lost until the Mayor’s children Alex and Andrea enter, they have escaped from the rats and they can lead the others to the sewers where the children are.

So the goodies set off to save the children, which means there is going to be one big battle between good and evil.

Who will come out on top? Will Hans win the girl? Will we have a happy ending?

Let’s find out together as Wexford Pantomime Society brings you (our version) of the marvellous story of “The Pied Piper of Hamlin”. 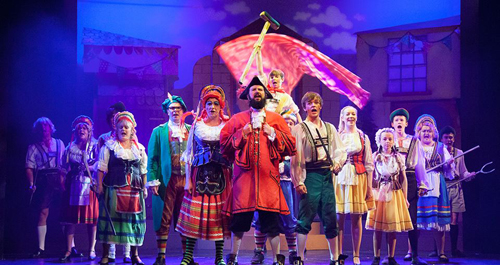