1. The Pied Piper – The title character is a baddie for a change. He is a mysterious evil man who only speaks in rhyme. A strong serious character, it is important that he moves well.

2. Hans (Singing) – Our hero. Despite not being the title character Hans is the lead character of our story. He is a funny lead though, and will have lots of comedy interaction with people and the audience. He speaks directly to the audience. He can also be heroic when needed.

3. The Mayor of Hamlin – Mayor Borris Maxamillion – A pompous busy mayor. He is confident and strong but can be a bit silly at times too.

4. Lena, his daughter (Singing) – The love interest, a sensible young lady, she is very caring and understanding. But knows her mind and can stand up for herself.

6. Alex, his young son – Age – 10-12. A cute, fun loving, adventurous young boy.
7. Frau Kinderflapping – Their Nanny (Singing) – The Dame – Male or Female – She is Han’s mother. As usual this is an over the top, loud, funny Mother hen type character. She is a professional Nanny and as all dames is man mad and quiet stupid. She may be the only person in this German show to have a German accent.

8. The Rat Queen (Singing) –A strong female acting part, the Rat Queen is a very scary and evil Rat with aspirations of power. Aggressive and nasty, she also has a split personality (A Rasta character) and talks to herself, so she has two characters. She’s the Boo factor.

9. Nibbles (Singing) – A female rat, part of the female comedy duo, these rats are both quiet stupid and are equally as stupid there is no leader among them as such. They are the right hand rats to the Rat Queen. Very physical actresses required to play these parts. They are essentially funny but also a bit sneaky and nasty.

10. Scratcher (Singing) – A female rat, the other part of double act, as above.

11. Councillor Helmut Stinkinpopper (Singing) – Part one of the male comedy double act that are based on Morcombe and Wise. Helmut is the straighter of the two and the sort of leader.

12. Councillor Herman Poopenhagen (Singing) – The other half of the male comedy duo, the funnier half he gets to deliver most of the punch lines set up by his partner. A very funny, fast talking comedy character. 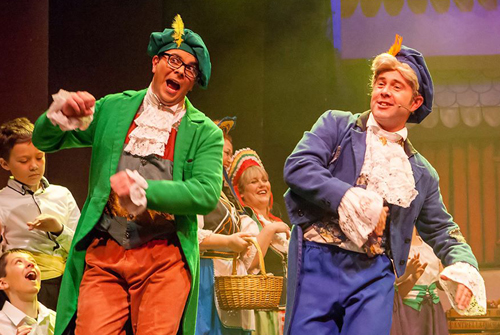