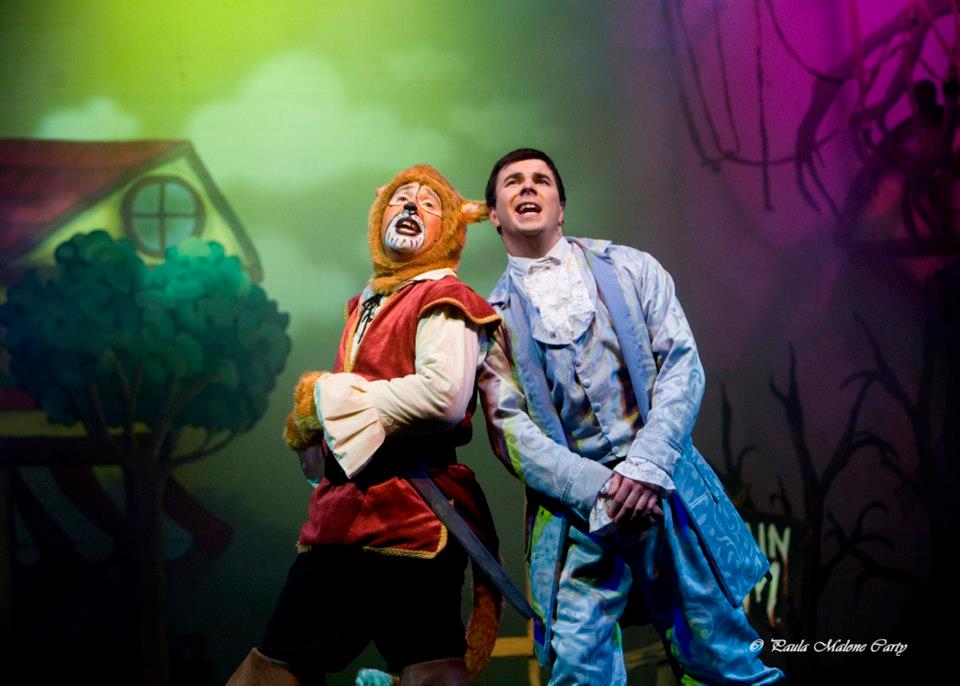 The Original “Tail” of – PUSS IN BOOTS

This show premièred at the Dun Mhuire Theatre, Wexford in January 2013 and was hugely successful. It’s slick and witty dialogue and lovable characters made it a favourite with young and old alike. Wexford Pantomime Society had their best year to date and broke all box office records.

A narrator opens our story…Once upon a time there was a Miller and he had three sons and when he died he left them each something, to his eldest son he left the mill, to his middle son he left his donkey and cart and to his youngest son Colin he left….. a cat!

Our Panto opens with the reading of the will, a judge at a high table announces what each son will receive as the three sons sit facing the audience.

The eldest brother Connor is at first delighted but then realizes he will have to pay property tax on the mill. The middle son Colm is also happy enough but then realizes he will have to pay motor tax on the donkey and cart. The third son our hero Colin is hugely disappointed as all he gets is the stinking cat! His brothers make fun of him and leave. As Colin is left alone we see Puss in his boots for the first time.

The narrator tells us that years have passed and Colin and Puss have become best friends but they are very hard up and travel from town to town looking for work. Things have not been going well for our hero until today when he reaches the town of Botanica. (Opening Number)

It is into this unhappy village that Colin and Puss wonder, as Colin leaves the stage to look for work Puss listens to the Queen and her ensemble talking and learns about the Giant and the Princess seeking a husband to be King but it can’t be anybody it must be a lord, like Barnaby. Taking all this in Puss interjects and tells them that his master is a young and handsome lord. He arranges a meeting between the Princess and his master for the next day, the Queen agrees. Colin returns and when Puss tells him the good news he is furious and reminds Puss that he is not a lord, in fact he is in rags and has nothing, Puss tells him to trust him as he has a cunning plan.

At the lake Puss tells Colin to take off all his clothes and get in the lake Colin reluctantly obliges. Then Puss hides all Colin’s clothes as the queen and Princesses arrive. Puss tells them that his master was swimming in the lake and some young rouges made off with his clothes. The Queen tells Barnaby to take Colin to the Palace and get him some clothes and when Colin gets dressed in the fine clothes Puss introduces his master Lord Colin. Princess Poppy immediately falls in love with Colin and he with her and the Queen invites everyone back to the village to celebrate. Barnaby is of course furious.

Back in the village and plans are being made for the wedding of Princess Poppy and Colin and everyone is in great form until the Giant’s debt collectors Taggart and Tennant arrive. Puss stands up to them and Colin accidently defeats them. Everyone is delighted Barnaby sees his chance, he suggests that “the hero” Colin should go and slay the Giant now and Puss says of course brave Lord Colin will. As the act ends Colin is worried but yet again Puss has a cunning plan! 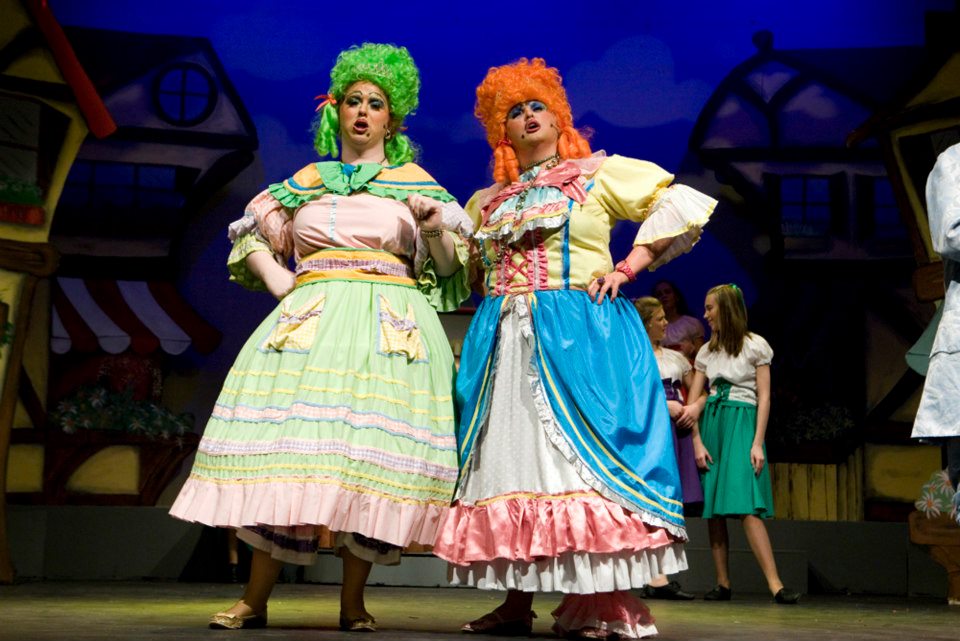 Act two opens with Colin and Puss on the road to the Giant’s house. Colin is worried but Puss reassures him that everything is going to be ok and that they have to follow their story to get to their happily ever after. In this scene they meet Hansel and Gretel who are lost in the woods and Little Red Riding Hood on her way to Grandma’s house.

Back in the village and Poppy is worried about Colin and decides to go after him. Her sisters see her off but when they tell the Queen where Poppy has gone Queen Marigold decides that they are all going after her and dragging Barnaby with them the three women set off into the woods.

In Taxamus’ castle Colin, Puss and Poppy are met and captured by the Giant’s henchmen straight away. As the Giant arrives on the scene all looks doomed. Then the others enter, they are disguised as beauty therapists who are here to give the Giant a make-over. When there cover is blown we have a large chase and fight scene that ends with the Giant winning. It seems all is doomed as the Giant makes plans on which one to eat first, Puss puts his cunning plan into operation.

He asks the Giant is he really as powerful and magical as the legend says he is.

The Giant of course says he is and says he has the power to turn himself into any creature. Puss of course asks him to prove it so the Giant turns himself into a lion, everybody is well impressed but Puss says that’s too easy now if he could turn himself into something really small like a mouse then he’d be impressed. The Giant does and Puss pounces on him and the Giant is defeated. The henchmen turn over a new leaf and victory goes to the goodies.

Back in the village and everyone is celebrating as the Giant is no more and Colin and Poppy are getting married. Petunia and Pansy are upset because they will never be wed. Just then Colin’s brothers arrive on the scene, they have heard that Colin is to be a Prince and want some of that. The two sisters immediately descend on the brothers, which is really just reward for their money grabbing thoughts.

This is where our happy TAIL ends and we finish with a big happy song.