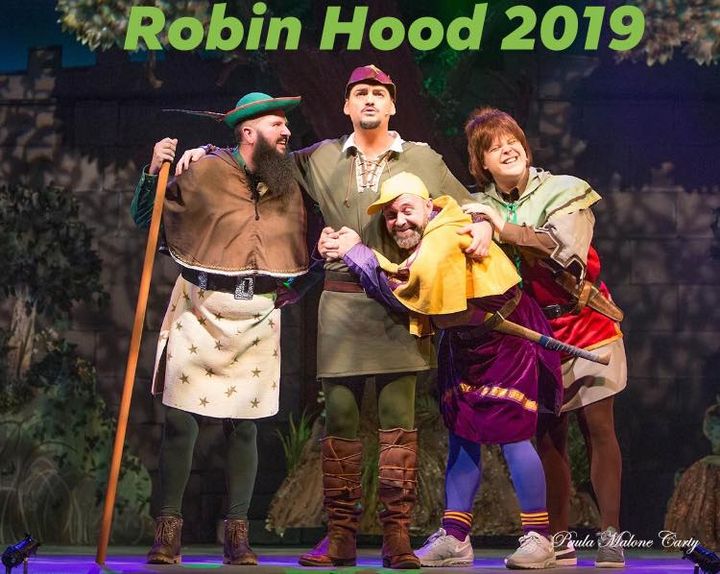 Our Panto opens with us being introduced to our new friends Barny the Bear and Blossom the Fairy. They are here to guide us through the magical Panto of Robin Hood. Hey it’s set in Sherwood Forest and Bears and Fairies live in the forest right? They are great fun and friends to the audience  throughout this adventure.

They tell us that our story begins in the village of Nottingham where Good King Richard has left England to travel to the Holy lands on a cruise, or crusade or something and in his absence Prince John is holding the throne. Prince John unfortunately has the intelligence and maturity of a five year old and is being manipulated by his Mo

ther and the Evil Sheriff of Nottingham. These two are bad news, they are selfish and greedy and inflict terrible rules and ridiculous taxes on the people.

Luckily the people have a saviour, a hero to save the day and that saviour is Robin Hood, what a guy. Robin and his gang featuring such well known outlaws as Little John, Will “Scarlet” and young Alan of Ferndale along with Friar Tuck fight continuously against the evil Sheriff and his cronies to help the poor. Robin Hood robs from the rich and gives back to the poor. Unfortunately the love of Robin’s life, the fair Maid Marian, is a ward of Prince John and along with her hand maiden the feisty Maid Mavis, lives in the palace with all the rotten baddies.
As the show begins the Sheriff and his assistants, Ban Gardaí Niamh agus Nuala, have been humiliated by Robin and his gang of Merry Men once more.
When the Sheriff retreats to the palace, himself and the secret love of his life Mumsie (Prince John and King Richards old croon of a mother) plan how to defeat Robin Hood and then overthrow Prince John, seizing power for themselves. They enlist the help of a hired sword called Sir Guy of Gisborne and set up a duelling contest knowing that Robin Hood won’t be able to resist, then they will have their chance to capture him.

Now the Merry Men and all our friends must come up with a plan to gate crash the Royal Birthday Party, slash wedding, slash execution of Robin Hood and save Robin and Marian from the fate in store for them.

With lots of sword fights, singing, dancing, terrible jokes and out of place local humour this adventure is sure to be a hit with all the family, so look out – Here comes Robin Hood!