Act 1 – Scene 1 – (A) The Gauze is in as a large book with the title “The Adventures of Robin Hood” is projected onto the screen.
Enter a Fairy named Blossom and a Bear named Barny. They welcome us to the Panto and explain that they are our friends and are here to guide us through the story. Because it is set in Sherwood Forest and you obviously expect there to be a fairy and a bear in the Forest, right?

They tell us that our story begins in the village of Nottingham where Good King Richard has left England to travel to the Holy lands on a cruise, or crusade or something and in his absence Prince John is holding the throne. Prince John unfortunately has the intelligence and maturity of a five year old and is being manipulated by his Mother and the Evil Sheriff of Nottingham. These two are bad news, they are selfish and greedy and inflict terrible rules and ridiculous taxes on the people. But luckily the people have a saviour, a hero to save the day and that saviour is Robin Hood, what a guy. Robin and his gang featuring such well known outlaws as Little John, Will Scarlet and young Alan of Ferndale fight continuously against the evil sheriff and his cronies to help the poor. He robs from the rich and gives back to the poor. Unfortunately the love of Robin’s life the fair Maid Marian is a ward of Prince John and has to live in the palace with all the rotten baddies.

So children young and old are invited to travel with their new friends Barny and Blossom as they bring us on an adventure that will see, good versus evil and love winning through as we unveil the incredible story of Robin Hood.

Gauze rises to the Village Square outside the castle walls.

Act 1 – Scene 1 – (B)
After the big opening number the Sheriff’s two henchwomen, who happen to be Ban Gardaí step forward to break up the crowd. They introduce their boss The Sheriff of Nottingham. The Sheriff tells the people that a tax has been imposed on music and singing and they all owe money for that opening number. Friar Tuck stands up for the people and is arrested but before he is taken away Robin Hood and his Merry Men arrive on the scene and save the day, humiliating the Sheriff and sending him back to the palace.
Maid Marian sneaks in as the Sheriff leaves and we see the love between Marian and Robin, unfortunately Marian’s best friend Mavis is in love with Little John but he does not feel the same way. The villagers and Friar Tuck thank Robin and his men for saving the day and a celebratory dance is done.

Act 1 – Scene 2 – The Palace
Prince John and Mumsie are playing a very boring game of hide and seek when The Sheriff comes in. The Sheriff is furious that Robin has made a fool of him again. Mumsie cheers him up and it is clear that The Sheriff and Mumsie are madly in love. (Disgusting) Prince John only cares about the taxes because he is planning his birthday party and needs money. Marian enters and tells them all what she thinks of them and storms off. The Sheriff and Mumsie are left alone and sing a romantic song (Barf).
Musical Number – Everything I do, I do it for you.
They have an evil plan to take power from Prince John. First though they must come up with a plan to get rid of Robin Hood and his men. Mumsie suggests they hire the help of a specialist, a hired sword known as Sir Guy of Gisborne. He is the strong and silent and scary sort in fact he doesn’t speak at all. The Sheriff unveils his plan to hold a duelling contest to draw Robin Hood to the village, then they can set Sir Guy on him and that will be the end of him. With this evil plan in place the baddies celebrate as Maid Mavis (Maid Marian’s hand maiden) who has over heard them vows to sneak out and warn Robin Hood.

Act 1 – Scene 3 – Deep in Sherwood Forest
Barny and Blossom enter and engage the audience.
The Merry Men enter they are out practising their skills, Robbing from the Rich, giving to the Poor etc.

Maid Marian and Mavis enter and tell Robin of the Sheriff’s latest plan. Robin despite the warnings insists on attending the duel. He will win the duel and the prize on offer of the hand of Maid Marian. For he’s a man, a man in tights and that’s what he does.

Musical Number – You and Me – But mostly me

Act 1 – Scene 4 – The Village Square
It is the day of the duelling contest and the village is a buzz with excited spectators. The Sheriff is making short work of all opposition and it looks like he will be the outright winner. But suddenly Robin Hood and his men arrive on the scene. Robin defeats the Sheriff and the day seems won. But a late entry into the competition appears in the towering frame of Sir Guy of Gisborne. Robin who is already tired from his fight with the Sheriff must now take on Sir Guy after a battle royale Robin is defeated and captured.
The sheriff announces that Sir Guy has now won the hand of Maid Marian and will be married to her as part of the Kings upcoming birthday celebrations. Leaving the baddies to celebrate. Now there will be a Royal Wedding and a Royal Execution as part of Prince John’s birthday bash.

Act 2 – Scene 1 – Deep in Sherwood Forest
Barny and Blossom sing the opening number of Act 2 encouraging the audience to believe and fight on.

Musical Number – I will get back up again.

Little John and the Merry Men enter they are downtrodden and defeated all appears lost, it seems the Merry Men can no longer be Merry. Marian and Mavis enter and rally the troops Marian comes up with a clever plan to get them all into the palace to gate crash the wedding and birthday party and free Robin. It involves a Teddy Bear and a Fairy Doll and a Friar with a barrel of ale.

Robin is visited in prison by Marian and they sing of their love.
The Sheriff and Guy enter and tell Nuala and Niamh to guard the prisoner. The two ladies are bored and fed up as Friar Tuck arrives to give the final blessing to the prisoner and maybe a little drop of ale. The ladies take an interest in the ale and Marian and Mavis free Robin.

Act 2 – Scene 3 – The Palace
It is the day of the royal birthday slash, wedding, slash execution. Mumsie and the Sheriff plan that once Robin Hood is out of the way they will do away with Prince John too and seize power.
Prince John enters and demands his birthday presents, two large boxes are brought in when he opens them he finds a huge teddy bear (Barny) and a beautiful Fairy Doll (Blossom)

As the Bear sings and dances for the crowd Marian and Mavis open the main doors of the Palace allowing the Merry Men burst in. The Sheriff calls for his guards and the two dishevelled hungover Gardaí enter. He asks for the Prisoner to be brought in. Then suddenly Robin swings in and draws his sword on the Prince. Guy bursts forward and a massive fight scene ensues.
As the fight scene ends and the baddies are defeated King Richard the Lionheart enters. He has returned from the crusades and banishes the Sheriff and Mumsie. Robin asks King Richard for Maid Marian’s hand in marriage and everyone celebrates.

In the last short scene all the loose ends are tied up and as is our tradition in Panto every one lives…….well you know how it goes. 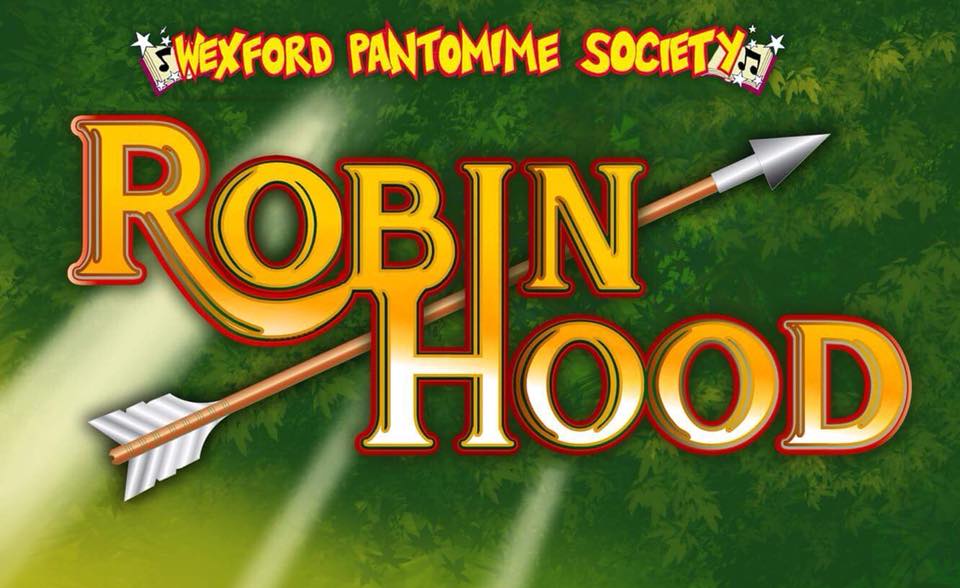