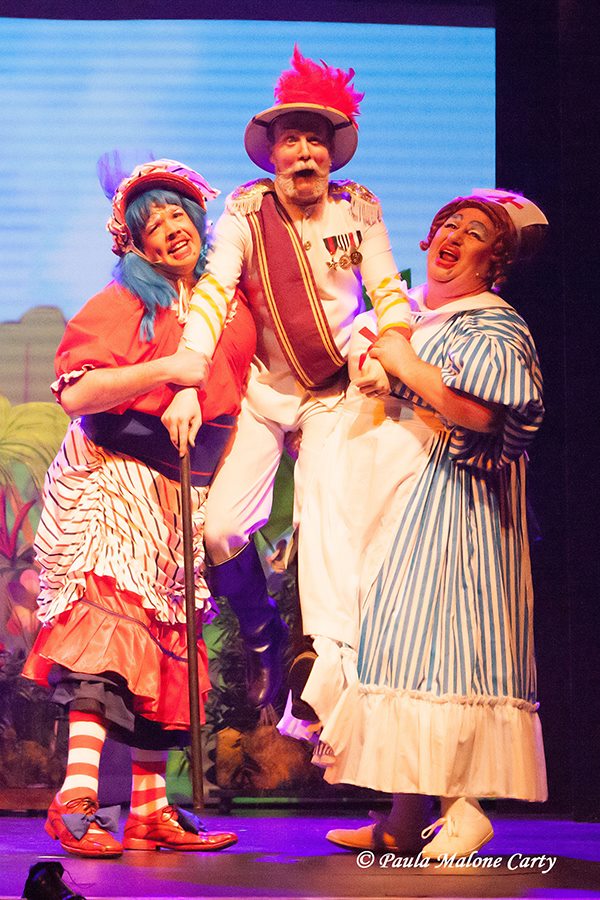 Our adventure opens with the dark and mysterious presence of Neptune evil lord of the Sea, who appears on his throne. At his feet begging for mercy is a pirate known as Blackbeard.

Blackbeard’s ship has been wrecked in a storm that has sent him to the bottom of the sea and he finds himself at the mercy of Neptune. Neptune agrees to spare Blackbeard’s life if he can get some others to take his place. The pirate promises to deliver many souls to Neptune and is spared.
Just then the Magical Mermaid Oceania appears on her throne, as Neptune represents all evil, she represents all good and warns Neptune off his evil plans and vows to protect all from his evil ways.
Next we find ourselves at a small cottage in the sand-dunes near a small fishing village somewhere in the world. This is the home of Dame Dolly Crusoe and her two sons, Robinson and Rupert. Robinson’s business of ship for hire is not going very well and the family are on the breadline. They need business badly.
At this very moment who should enter but the daughter of a rich old gentleman who is looking for a ship to hire. What a spot of luck! This is Polly daughter of Major Montgomery Mountgeorge who soon arrives on the scene accompanied by his nurse, Nurse Ninny, our dame! But wait we already have a dame! UH OH! TWO DAMES! Looks like we have a Dame off!
The Major introduces Blackbeard who is cleverly disguised, he has come to the Major to ask him to finance a voyage to find buried treasure and Blackbeard has a map. Blackbeard also introduces his side kick Reg who is a Cabin Boy, despite being a girl. Robinson at once agrees to take them to sea, partly because he needs the money but also because the Majors daughter Polly is hot! Dame Dolly who can see dollar signs all over the Major jumps at the chance to come but she will have a battle for his affections as Nurse Ninny has well established her feelings for the Major who of course is to dithery to notice either of them. Rupert also has been smitten by Reg the Cabin Boy / Girl? So the scene is set for adventure, danger, excitement and romance on the high seas.
Next we find ourselves on board Robinson’s old and battered ship The Saucy Sally. As we set off on our journey. Blackbeard tells Reg the evil plan that Neptune is going to hit the ship with a massive storm that will surely sink it drowning all on board, making him a free man again. So the plan is that Reg and he will escape on the ships only lifeboat.
As the storm hits Reg repents and warns the others but it is too late as the ship sinks to the bottom of Davy Jones’ Locker all is doomed it would seem but The Good Mermaid Oceania is on hand to work her magic sending all our friends on an unbelievable adventure at the bottom of the sea.
While our hero Robinson finds himself washed ashore on a strange desert island, where he meets Girl Friday and her pet gorilla Harry. But beware Robinson because Blackbeard is still on your heels and Neptune still wants your soul and there is a dangerous volcano waiting to explode on that island!
Sit back boys and girls, ladies and gentlemen and brace yourselves for adventure beyond belief as we set sail with Robinson Crusoe!