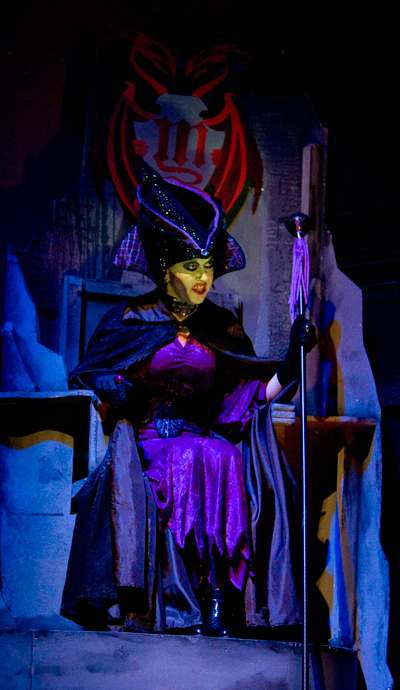 The Palace of King Stefan

The show opens with a narrator speaking and projections on the gauze then there is a precession of guests coming to celebrate the birth of Baby Aurora. The guests come up through the audience and arrive on stage. Then the large double doors at the back of the stage open and the King and Queen enter with the baby. The King proclaims the arrival of his heir and announces that they must all “Party”.

After the opening number King Hubert is announced he enters, then the royal nanny, Nanny Nintendo enters with a very young Prince Philip, the Kings talk and it is unveiled that they plan for Princess Aurora to marry Prince Philip when they come of age. Just then the trumpet sounds to announce the arrival of the good fairies that have been invited to bring gifts to the child.

The Blue Fairy of the East (Dublin) – Merry-weather brings the gifts of Beauty and knowledge. The Green Fairy of theMidlands(Offaly) – Fauna brings the gift of talent and ability. Just when The Red Fairy of the South (Cork) Flora is about to give her gift there is a crash of thunder and the double doors burst open and Maleficent the Evil Fairy enters the room.  She is angry because she was not invited to the party.

She puts a curse on the baby Aurora that when she reaches her eighteenth birthday she will prick her finger on a spinning wheel and die. She then exits. Everyone is upset then Flora steps forward and reminds them she still has her gift for the child.  While she can not break the spell she can change it a bit that she won’t die but only fall into a sleep and that a kiss from her true love will break the spell.

The princess will never be told about this and will be taken by her three fairy godmothers to the forest to hide till she turns eighteen.

Scene 2 – Deep in the Great Forest

Eighteen years have passed and the princess has grown into a beautiful young lady. She enters singing.

Her three fairy God Mothers come out of the cottage and are disguised as normal women. It is clear that Aurora who is now called Briar Rose does not know that she is a princess and her three guardians are in fact fairies. They take her inside.

Next Maleificent’s two henchmen, Vivian and Victor, enter they have been searching for the princess on their bosses command for the past eighteen years and are fed up looking. Auroracomes out to do her chores and they hide. Then Philip re-enters and is shocked to seeAurorathey get to talking and fall in love. They sing together.

Musical Number – “I Know You” (Reprise)

They are about to kiss when Nanny Nintendo arrives in to disturb them and Aurora flees into the woods, before she goes they arrange to meet again he is to call to the cottage that night at mid-night.

The King enters than and explains to Philip that he can’t be talking to peasant girls and that a marriage has been arranged for him with a Princess in a neighbouring kingdom. He is furious and he argues but to no avail his father sings.

As they exit Aurora and her Godmothers come out she tells them that she has fallen in love, so they decide to tell her the truth, that tomorrow on her eighteenth birthday they will be bringing her back to the castle because she is a princess and a marriage is arranged for her with a prince, they don’t tell her of the Evil fairy and the curse. She is upset, as she has fallen in love with Philip who she thinks is a peasant they enter the cottage.

Vivian and Victor come out from hiding delighted that they have found the Princess they summon Maleficent who appears and makes plans to kill the Princess.

Scene Three – In the Cottage

Aurorais down in the dumps because she is in love but can’t be with Philip, her guardians sing her a song to cheer her up getting the whole audience involved also.

They decide then to go to the palace to make plans forAurora’s return tomorrow they leave her alone.

There is a knock at the door and it is Vivian and Victor in disguise they tell her they are door-to-door salesmen selling beautiful gowns fit for a princess. She is interested and they fit the dress on her, of course they need to make adjustments and unveil a spinning wheel.Auroraof course pricks her finger on this and falls into a great sleep.

Maelificent appears and celebrates. The good fairies arrive back but because they are in disguise and don’t have their wands they are powerless and Maleficent tells her men to tie them up. She tells them she is aware of their plan to get a prince to wakeAuroraand she says she will never let that happen and to be sure she will takeAurorato her hidden palace where she shall lock her away never to be kissed.

End of Act One.

It is nearly mid-night and Prince Philip enters to meetAuroraas planned he sings the opening song of the half.

Musical Number – “I will go the distance” (Hercules)

After the song he enters the cottage.

Nanny Nintendo enters next she has come looking for Prince Philip who slipped away unknown to her. Philip comes out of the house he has untied the three fairies; he doesn’t know they are fairies yet. Nanny tells the fairies that this man is a prince and he can’t marry their ward as he must marry a princess, the fairies are shocked as they did not recognise him and they reveal that they are the good fairies and their ward is in fact Princess Aurora.  Just then King Hubert comes in he is in a rage and demands that the Prince comes home immediately. When they calm him down and explain what’s happening everyone is delighted that the prince and princess are in love. But there is one problem the Princess has been put to sleep and taken to the Evil Fairies castle. Prince Philip decrees that he will go on a quest to find her and they all agree to go with him.

But they don’t know where to start the fairies might be able to help here in preparation for an emergency like this, that they would not have their magic they have hidden three magic gifts. Merry weather has hidden a magic mirror that will always show whereAurorais, in the audience under one of the seats but she can’t remember which so the audience must all look for it, it is found and brought to the stage. Flora and Faunas gifts will not be as easily retrieved Flora has hidden a magic sword and Fauna a magic shield deep in the haunted forest. But according to the mirror they must go through the forest anyway to get to the Evil Fairies castle. So they all set off on their quest.

We are in a very dark and scary part of the woods, there is a large rock blocking a cave at the back where the sword and shield are. The Evil Fairies troll army come through patrolling every now and again and everyone has to hide. Everyone is a bit scared except Philip who is brave and true to his mission but he cannot face the Evil Fairy without the protection of the sword and shield. They try to move the rock but to no avail. The troll army comes back and is about to capture them, just then there is a scary howl and a wolf runs onto stage, everyone is terrified especially the wolf. It turns out he is The Big Bad Wolf from the fairy stories and he explains how he is really a vegetarian and a pacifist he tells them how he is misunderstood he then helps them move the rock and get the sword and shield. They are delighted and go on with their quest.

As the goodies enter the evilQueenscastlethey are all terrified except Philip who bravely leads the way. Maleficent appears on her throne surrounded by her troll army and Victor and Vivian. She tells them all them all that they are now her prisoners and that they will never find Princess Aurora because her spy’s have hidden her somewhere really clever. But of course they haven’t and Philip finds her and a big Panto chase scene kicks off with Princess Aurora getting pushed around on a bed on wheels.

As the chase scene comes to an end Philip kissesAuroraand the spell is broken. Maleficent is furious and tries to kill Philip but he is saved by Bradley (The Wolf) and uses the magic sword to kill Maleficent in a dramatic finish. With the baddies beaten our heroes head home victorious.

Aurorais reunited with her family and Philip asks King Stefan for his daughters hand in marriage, which he gets and everyone lives happily ever after.