Snow White and the Babes in the Wood 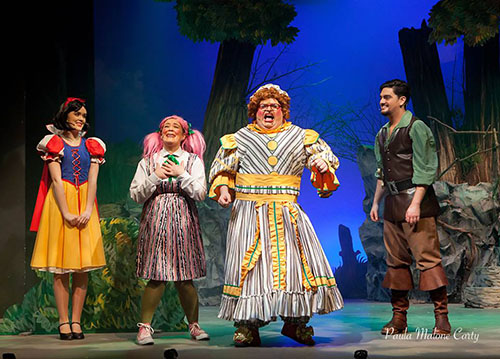 A new and exciting Panto adventure……

Once upon a time there were two brothers Jacob and Wilhelm Grimm and they wrote many magical fairy stories. This Pantomime is a combination of just some of these wonderful stories and our narrators for this adventure are none other than The Brothers Grimm who at the offset tell us that with pure imagination even their stories can take interesting and exciting new directions.

They introduce us firstly to Snow White a beautiful young lady who has been locked away in a tower by her vein and egotistical Step Mother the Evil Queen. The Queen has a magic mirror that tells her she is the fairest in the land but as Snow White turns eighteen the mirror cannot lie and must declare Snow White to be the fairest. The furious Queen sends her sidekick Cedrick to the nearby village to hire the services of a huntsman to take Snow White into the woods and kill her.

In that very village we meet Horace. Horace is an out of work huntsman, coincidently, who hangs out in this small village on the edge of the Woods with his domineering Mother the Widow Gillhollie and overgrown childlike sister, Heidi.
When approached by Cedrick and given the task of doing a
way with Snow White, Horace initially refuses but with some persuasion from his Mother, he reluctantly agrees to do the horrible deed.

In this scene we also hear about Hansel and Gretel who have been abandoned by their parents in the woods because of financial difficulties and we meet Red Riding Hood who is also being abandoned by her mother in exchange for a man she met on the internet and a holiday in Spain.

So now our story takes us deep into the woods as Horace leads Snow White to her doom, followed secretly by his Mother and Heidi to ensure he finishes the job.

In the woods we meet Hansel and Gretel who come across Rapunzel the girl in the tower with the beautiful golden hair that she lets down for an evil Witch to climb up.

Later in this scene Horace breaks down and tells Snow White everything, much to the disgust of The Widow and Heidi. They are suddenly all disturbed by a howl as the Big Bad Wolf enters the scene. He has a run in with the Three Little Pigs and is about to have a pig supper when Red Riding Hood enters and the Wolf leaves the bacon for a more tender young bite.

The others who have seen this, decide they have to save this young girl and head off to Granny’s house to protect poor Red.

Next we find ourselves back with The Evil Queen who by now hopes to be the fairest in the land but with Snow White still alive the Mirror must disappoint her once more. She is furious but her fury is disturbed as a Prince arrives at the palace seeking a bride. The prince is not pleased that Snow White is not at home and promises to find her in the woods and marry her. The Queen vows that she will find Snow White first and sets off for the woods taking us to the end of Act One.

Act Two opens in Granny’s house where the 97 year old is rocking out! The party is cut short as the Big Bad Wolf enters and locks her in the wardrobe as he poses to be granny. But before he can eat Red Riding Hood Horace, Snow White and the others arrive on the scene and save Granny leaving the Big Bad Wolf disgusted and vowing revenge.
So now Horace, Snow White, Red, Granny, the Widow and Heidi are all in the deepest woods. Something is clearly developing between Snow White and Horace and just as it seems they are about to kiss who should enter only Prince Charming. He sweeps Snow White off her feet and off the stage. Horace is left heartbroken.

Disappointed Horace leads his band of ladies for home but on the way they find Hansel and Gretel gorging themselves at The Gingerbread House. The Witch has tricked them into believing she will care for them but Horace tells them the truth, that she can’t be trusted and the children rebel and leave the Witch disgusted and vowing revenge too.
The vengeful Witch and Wolf then run into The Wicked Queen and the three of them team up and plan how best to win the day.

In the next scene Snow White and the Prince happen upon Horace and the others and Snow White admits that she does not love the Prince but is in fact in love with Horace. The Prince is devastated but Hansel and Gretel tell him about the beautiful girl in the tower, she could be his true love. Led by the Prince our ever growing band of adventurers set off to save Rapunzel.

Just how will this crazy tale wrap up? Can all these stories have happy endings? All will be revealed as we head into the Woods for this amazing adventure.