Snow White and the Babes in the Wood - Synopsis

Show opens with The Brothers Grimm (Jacob and Wilhelm)

They introduce themselves as our narrators for the night. They will be mostly invisible to the characters on stage but will move between them. They tell us that the fairy stories we love so much sometimes can unfold in different ways depending on how much we use our imaginations. So we are going on a journey into our imaginations to see how things develop. The first of their stories they introduce is Snow White. We see her sitting in her tower singing.
Musical Number – “I Know it’s today” – Shrek the Musical

Next they introduce The Evil Queen who appears on her throne and her assistant Cedrick. The Queen calls on her Magic Mirror. The large Mirror is lowered in centre stage she speaks to it asking who is the fairest of them all. The Mirror says that Snow White is and shows us a picture of her sitting in her tower.

The Queen orders Cedrick to go and hire someone to kill Snow White. She asks the Mirror to show her someone and we see Horace the Huntsman in the mirror.

Scene 2 – On the edge of the Woods

Lights up and we see Horace, his sister Heidi and his mother The Widow on the edge of the woods.

After the dance number Horace, Heidi and The Widow introduce themselves. Horace is an out of work Huntsman so as usual they are poor. The two woman give Horace a hard time. Horace dreams of greater things.

Musical Number – “Who I’d be” (Shrek the Musical)

Little Red Riding Hood and her Mother enter. Red is being sent to her Granny’s house with supplies and she sets off into the woods. Her Mother is eloping with a man she meet on the internet, unknown to poor Red, It becomes clear that the woods is a dark and scary place.

We meet Rapunzel in her tower. The Brothers Grimm introduce Rapunzel.

The Witch comes up through the audience and asks Rapunzel to let down her hair. The hair is lowered down and the witch climbs up into the tower and has a short scene with Rapunzel. The Witch exits. As Hansel and Gretel come in they have a brief conversation with Rapunzel before exiting Heidi and The Widow hide in the woods.

Enter Horace and Snow White, he is pretending to be bringing her on a nature trail. Horace is trying to get up the courage to kill Snow White but in the end can’t do it and tells her everything. The Widow and Heidi are disgusted with him as they come out of hiding, but decide to let Snow White live and come home with them, suddenly they hear a howl and all hide.

The Big Bad Wolf enters. He meets The Three Little Pigs the Wolf is very interested in a bacon super but is distracted when Red Riding Hood enters:

The Wolf forgets about the bacon and heads off to Granny’s for supper.

Horace and Snow White who have observed this from hiding set off to save Red Riding Hood followed by The Widow and Heidi.

The Queen calls her Magic Mirror and asks who is the fairest of them all. To her disgust she learns Snow White is still alive. Just then the doorbell rings and Prince Charming enters he is all bravado and has come to marry a princess.

Musical Number – “Such a groovy guy”

Musical Number – “The edge of glory”

After the song Granny is wrecked and sleeps on the bed as the Wolf enters. He locks her in the Wardrobe and gets into her bed. Red comes in and is more interested in being on her phone than of Granny or the Wolf. The Wolf is about to pounce when Horace, Snow White, Heidi and The Widow burst in the door and rescue Red and Granny. They escape into the woods leaving the Wolf vowing revenge.

Scene 2 – Back in the Woods

The Brothers Grimm check back with us to keep us up to speed before the Prince enters and has a short scene with The Three Little Pigs. Next we see Cedrick and the Queen who are searching for Snow White.

Our gang of heroes enter next and eventually Snow White and Horace are left alone she sings to him:

By end of the song Horace realises that he is madly in love with Snow White.

Suddenly the Prince enters on his horse and sweeps Snow White off her feet. Horace is left heartbroken.

Hansel and Gretel are gorging themselves outside the house, filling their little faces with sweets as Horace and the others who are heading home enter they explain to the children that they are in great danger. The Witch enters and the children rebel against her.

After the song they all run away leaving the Witch unhappy and vowing revenge.

The Wolf arrives on the scene and soon The Evil Queen appears with Cedrick. She tells the others that if they team up they can have their revenge.

Scene 4 – Back in the Woods

Our family of goodies have set up camp for the night and Horace sings:

After the song Snow white enters and tells Horace that she can’t reach her happily ever after without him.
The Prince enters and is disappointed but Hansel and Gretel tell him about the Princess in the tower Rapunzel.
They all set out to find a Princess for the Prince.

As they leave the baddies enter and plan their revenge.

When they reach the tower the Brothers Grimm tell them how to call to get her to let down her hair. The Hair comes down and the Prince climbs up. But it is a trap and the Witch is waiting. The wolf appears on stage with Rapunzel held tight. The Evil Queen enters and tells them that they are all doomed. All hope seems lost till Cedrick appears and says he doesn’t want to bad anymore, he is turning over a new leaf and has some old friends of Snow White’s who have a bone to pick with the Queen. The Seven Dwarfs march onto the scene causing the Queen to panic, grab Snow White and run!

As always the chase results in the baddies getting defeated and the goodies winning the day.
After the chase everything is wrapped up with a few surprises as Rapunzel rejects the Prince but Red Riding Hood’s mother arrives back and the Prince and her fall in love at first sight!

The Prince vows that everyone will come and life with him and
Our narrators the Brothers Grimm once more wrap up our tale…
as they all live happily ever after….or something like that. 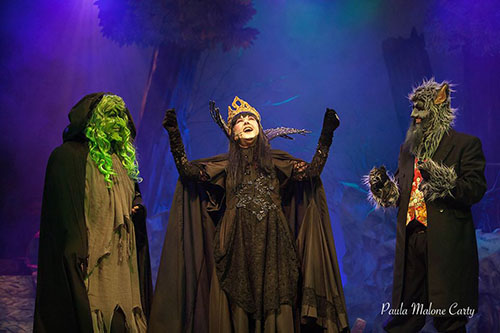