Jack and the Beanstalk – Synopsis

Once upon a time there was a magical land far away that was watched over, as all lands are, by Mother Nature. This kind and magical fairy tries to keep order and right in the many lands she over sees. But in Fairy-tale Land, Mother Nature has lost control to her evil sister Poison Ivy.

Poison Ivy has fallen to the dark side and has tricked a big scary and gormless giant into working with her and together they have taken control of Fairy-tale Land and its residents live in fear.

Our Panto is introduced by Mother Nature and then Poison Ivy addresses the audience and introduces her associate Mr. Big the giant.

After this scary opening we find ourselves in the village square of Fairy-tale land and despite the tyranny they live under the villagers are still upbeat and lead us in a cheery opening number.

After the opening number we meet Dame Daisy, Jacks mother. She runs a failing dairy farm and times are tough. Also in the village we meet her next door neighbour Little Miss Muffet or Maisy who has acrophobia and is terrified of spiders and most things as a result she is very jumpy and a bit crazy . On the other side lives Little Boy Blue, or Bobby Blue. He is Blue by name and blue by nature as he is a very depressing and negative character who sees the worst in everything. Add Jack a high spirited idle young man with all the brain power of a grape and his pet talking cow Dougie and we find ourselves in a somewhat certifiable village of loons.

A poor unfortunate Baron rules this village, this nice old gent Baron Backstop finds himself in a tricky situation as Poison Ivy demands he collects high rents from the villagers and pays them to her if not her friend the giant, Mr Big, will eat them all starting with his daughter Jill, who happens to be our hero Jacks girlfriend. Jack and Jill didn’t they go up a hill or something?

Anyway the Baron can’t get his villagers to pay so he has employed the services of the Gardaí. And two familiar looking female Gardaí enter. Under the threat of arrest Dame Dolly and Jack must come up with the money and to do this they must sell the only possession they have – Dougie! Reluctantly Jack, Maisy and Bobby bring poor Dougie off to market.

Poison Ivy enters at the start of the next scene and laughs at the fools trying to get money, she will spoil their plans. With the help of her two cronies Jekyll and Hyde they will buy the cow and in return give Jack a handful of beans. Beans! What is this boy a fool?

Dually Jack and his friends arrive and believe it or not Jack sells the cow for the beans. Yes the boy is a fool. Before they leave though Mother Nature appears and unknown to them puts a spell on the beans before they head home.

Back in the village the Dame is in fine voice before the others arrive back with the good news that they have secured magic beans in exchange for Dougie. Dame Daisy is none too happy and is in fact about to end Jacks life when the Baron arrives for the rent.

Of course they can’t pay and to make things worse Poison Ivy arrives to collect the rent from the Baron. He begs for mercy but it falls on deaf ears and Poison Ivy summons the giant. The scene goes dark as huge footsteps shake the earth and when the lights come back up the baron’s daughter Jill is gone. Devastated the Baron exits and Dame Daisy fires the magic beans at Jack. Everyone leaves and Jack is left alone to mourn his decisions before heading off to bed.

That night Mother Nature again appears and works her magic and from where the beans were thrown grows a huge Beanstalk.  The villagers wake in shock and in the shadow of a giant Beanstalk that stretches right up into the clouds where the giant lives. Jack decides that he is going up the beanstalk to face the Giant and rescue his love Jill. The Baron enters he has hired a professional Giant slayer Sir Desmond Dashing, he certainly talks a good game but is he really a hero? So after some debate it is decided that under the leadership of Sir Desmond they will all venture up the beanstalk to face Mr Big.

At the top of the beanstalk is a magical new land where our heroes must face the evil Jekyll and Hyde and an army of little creatures called Finions (which are nothing at all like Minions for fear of copyright infringement) Also they will meet the giants poor put up on butler Dunston and Hattie a high spirited hen that lays golden eggs, which could be the answer to all their problems.

But to free the hen and rescue Dougie and Jill first there is the “not so small” matter of Poison Ivy and Mr Big.

Comedy, wackiness, danger, magic and song is on the menu as we journey up the Beanstalk with Jack on the adventure of a lifetime. 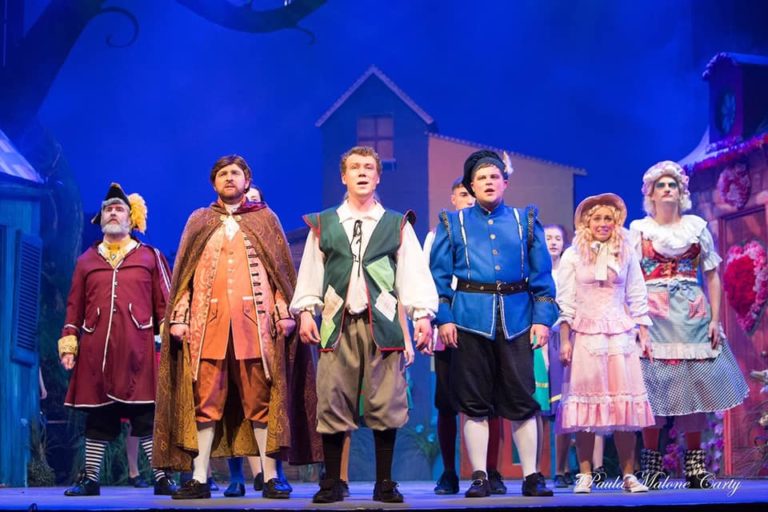