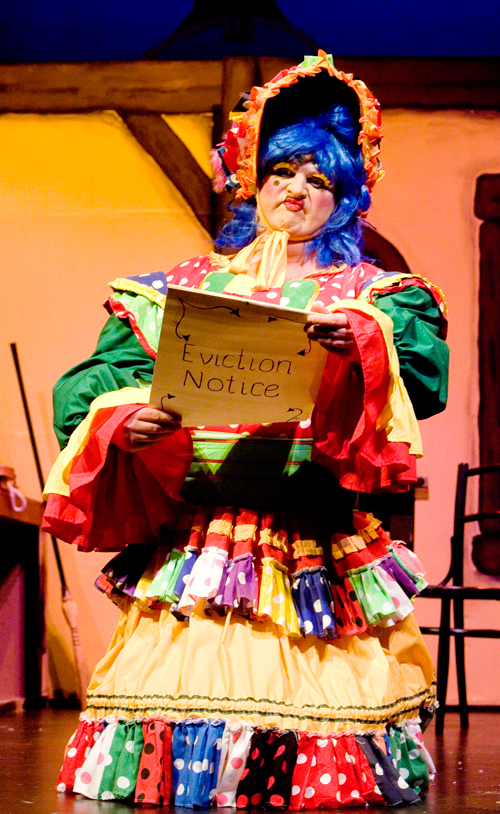 Business is bad but things are not too bad because the landlord is Jill’s father Mayor Hickory, who is in love with Mother Goose, and he ignores her arrears. So everyone is happy inNurseryLand, they have to be because their happiness is the only thing that keeps the evil Demon Dark-Heart at bay. He waits in his layer with his assistant Maligna for the first sign of unhappiness so he can seize power. But everything is happy inNurseryLand. The Good Fairy of the Recession, Marjory makes sure of that and keeps the Demon in his place.

As our story begins all the villagers are celebrating Mother Goose’s Birthday, Mayor Hickory is away on business and in his haste to get back on time for the party he takes a short cut across the Demon’s lands. The Demon’s gangsters Mac, Benny and Bruno catch him.  The Demon demands that if he releases the Mayor he must enforce payment of rents on the villagers and evict anyone who can’t pay. He tricks the Mayor into signing a contract that says if he doesn’t enforce the rents the Demon gets his daughter Jill as a prisoner.

The next day as everyone gets over the hangovers of the night before, the Mayor and the gangsters arrive at Mother Goose’s cottage to evict her, as he has no choice.

Mother Goose is homeless and broke. They have to come up with a plan to pay the money they owe, so reluctantly Mother Goose sends Jack and Simon to market to sell Prissy the Goose.

On their way to market they meet Marjory who puts a spell on the goose and tells them to return home and at six o’clock something magical will happen.

Mother Goose is furious when they return with the goose, but her anger quickly subsides when the clock strikes six and Prissy suddenly lays a golden egg.

With their newfound wealth everyone is delighted and the Demon’s plans are thwarted he retreats to his layer, but vows he will have his revenge.

In act two Mother Goose is wealthy and everything seems great. But Mother Goose is quickly learning, there is more to life than money, she is upset because the Mayor who she thought loved her evicted her.

The Demon sends Maligna in disguise as an old beggar, she tells Mother Goose that she knows how she can become young and pretty and offers to trade a map that leads to the magical Fountain of Youth (a fountain that if you enter makes you young and beautiful) in exchange for the goose. Mother Goose makes the deal and sets out to find the Fountain of Youth.

Will Mother Goose become the next Kate Moss? Will Jack and the others talk some sense into her in time? Or is her Goose cooked, literally? Will the Demon seize power? Or will we have a happy ending?

Fill out the form below: