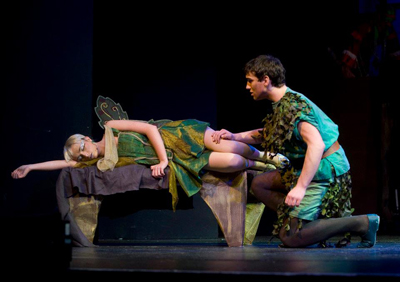 Scene1 – In the Beginning

The curtains open to reveal the Nursery of the Darling children. The lights are dimmed and imaginative and smoke billows across the floor so that we can’t clearly see that it is in fact a Nursery. Captain Hook and his pirates are in the middle of a fierce battle with Peter Pan and the lost boys, this fight is accompanied by exciting music and this opens the show. 1. Musical Number – Fight Music

This battle is interrupted when Mr Darling appears in the Nursery door and bellows to his children. As he shouts the pirates and lost boys disappear as the lights come up to reveal the Nursery and on one bed sits Wendy reading aloud an adventure of Peter Pan as John and Michael act it out. They stop as their father angrily enters the room, he is looking for his cuff links as he is trying to get ready for an important dinner he is attending that evening. Nana the dog that also serves as a nanny enters with Mrs Darling she tries to calm him down. Michael has his cuff links, which they had been using for buried treasure. Their father is angry and gives out to Wendy for filling the boy’s heads with such silly stories. He decides it is time for them to grow up and that Wendy is to old to sleep in the Nursery anymore and tomorrow will move to her own room.

After he leaves followed by his Wife after she speaks some comfort to the children and tells Nana to get them ready for bed. When they have left Nana gets off all fours and starts to talk Nana can only talk to children who have imaginations and so there parents don’t know he can talk. He tells them everything will be alright and settles them for bed. Their parents re-enter to say good-bye and the children argue some more with their father who leaves in a huff.

Nana settles them down again and leaves them to sleep.

The children fall asleep when suddenly the window blows open and a small light zips in the window and around the stage before vanishing. Then Peter Pan flies in through the open window looking for the light with is in fact Tinker-Bell he calls her and wakes Wendy who begins to talk to Peter Pan. Peter tells her that he listens to her stories all the time, she asks him where is his mother he says he does not have one and asks her would she be his mother and come to Neverland and tell stories to all the Lost Boys. He introduces her to Tinker-Bell who is immediately jealous of her and doesn’t like her. Despite this Wendy decides to go to Neverland with Peter but asks how they will get there. Peter tells her they shall fly and he teaches her to fly.

Projection on the full gauze that is dropped in showing all of them flying across London etc. and off to Neverland accompanied by music.  2. Musical Number – Flying Music

In Neverland the lost boys and the Indians are dancing and having a celebration 3. Musical Number – “Oh What a Night”.  During the festivities they introduce the beautiful Indian princess Tiger Lily, who is not so beautiful and dainty and talks to the audience she introduces herself and the lost boys and welcomes everyone to Neverland. Suddenly Tinker-Bell flies on and tells them that Peter Pan is in trouble and being chased by a dangerous Wendy Bird the Lost Boys spring to action and Slightly shoots an arrow at Wendy and hits her they all celebrate as she falls till Peter comes in and is angry. Luckily Wendy is not hurt and Slightly apologises and tells peter that Tinker-Bell told him too. Peter banishes Tink as Nana and the others enter. Everyone is introduced to each other and Nana agrees that they can all stay for a while.

4. Musical Number – “Shiver My Timbers”. Captain Hook and his pirates enter. Hook talks about how he loathes Peter Pan and tries to come up with an evil plan to find Pans layer.

Just then Tiger Lily enters looking for Nana. Hook threatens her and demands she tell him where Pan’s den is, she refuses and dares him to do his worst he accepts the dare and decides to take her to Marooner’s Rock where the tide will come in and drown her if she does not speak. The pirates grab her and set off to carry out this evil deed.

The scene at Marooner’s Rock opens with a musical number led by Sea Orchid and Ocean Breeze the mermaids. 5. Musical Number-?  Peter and Wendy enter and meet the mermaids soon they hear the Pirates approaching. As Smee and the other pirates enter with Tiger Lily Peter and Wendy hide. As the pirates are about to tie Tiger Lily to the rock Peter pretends to be Hook and shouts for them to release Tiger Lily the pirates are fooled and do as they are told he then makes them do an embarrassing dance. Then Hook enters casually passing Tiger Lily as she leaves he cops on and is not happy with his crew. Peter continues his impersonation until Hook finds him and a fight ensues.

6. Musical Number – Fight Music. When it looks like Hook has the better of Peter we hear ticking and Hook knows that the crocodile Tick Tock is approaching. Peter throw Hooks hand to this croc when he cut it off in another fight and Tick Tock follows Hook everywhere looking for the rest of him. The crocodile is flung on and Hook wrestles it off stage. The pirates exit and the mermaids sing as Peter and Wendy share a romantic moment. 7. Musical Number – “Kiss the Girl”. Tinker- Bell who has just arrived on the scene sees this and storms off furious and jealous.

Scene 5 – The Plot Thickens
The next scene opens back in the woods in Neverland with Nana and Tiger Lily and the Lost Boys, Tiger Lily is telling an exaggerated tale of how she defeated Hook. They all scarp per when they hear Captain Hook approaching he enters, furious after another loss to Peter, with his Pirates who are asking him to give up on Pan and go back to a life of Piracy. When Tinker-Bell enters in a rage he tries to calm her down he realises she is jealous of Wendy and says he can help her to get rid of Wendy if she shows him where Peter Pan’s home is he will take Wendy away when he heads back to sea and she can have Peter back. She tells him and the scene and act ends with Captain Hook planning what he is going to do to Peter Pan now that he knows where his home is. They take Tink prisoner and sing a song to end the act. 8. Musical Number –“I’ve Got A Dream”/ “We are the Champions”

Scene 1 – The Home under the ground.

The second act opens with a big celebration with the Lost Boys and Indians. 9. Musical Number -?

Nana and Tiger Lily head off for a romantic walk as the rest of the Indians leave. It is time for bed 10. Musical Number –“ Land of Dreams”. The conversation turns to mothers and home and Wendy decides its time they went home as their mother will be worried.

They decide to go and the Lost Boys decide to go with them but Peter won’t leave, as he doesn’t want to grow up. As they say goodbye to Peter and leave Wendy leaves Peter his medicine and makes him promise he will take it, Peter is sad as they go above ground and he goes asleep. As they go up the Pirates who have been waiting above ground capture them.

Hook slips down to their layer and sees Peter asleep he produces a vile of poison and pours it in Peter’s medicine then leaves.

Peter wakes up and is going to take his medicine when Tink rushes in having escaped from the Pirates and tries to stop him he won’t listen to her so she drinks the poison herself to stop him drinking it. Tink is dying now and Peter asks the audience to help save her by shouting that they believe in fairies the audience do this and Tink is saved. Nana and Tiger Lily arrive back and tell Peter that the Pirates have captured Wendy and the boys. They all prepare for battle with Hook “It’s Hook or me this time” they sing a song 11.Musical Number -? as they set off to save the others. Or Nana and Tiger Lily sing a funny romantic song after the others leave.

Scene 2 – Onboard The Jolly Roger

On the ship Hook tries to get the boys to sign up as pirates 12. Musical Number – “Professional Pirate”/ “I’ve got a Dream” but they won’t so they face the plank. Wendy walks it first and when she goes off the end she rises in Peters arms Peter and the others storm the boat and a huge fight breaks out, 13. Musical Number – Fight Music, at the end of which the pirates are defeated and Hook is attacked by the crocodile again. The children celebrate and Tink puts fairy dust all over the boat so that Peter can captain it and fly them all back to London. 14. Musical Number -?

The Nursery, which for this scene just consists of the double doors and a rocking chair is down stage right in the corner and the rest of the stage, is in darkness. In the Nursery Mr & Mrs Darling wait for their children to return. They come in through the double doors and introduce them to the Lost Boys who they say they will adopt. Peter will not stay though as he never wants to grow up. Wendy and the boys are sad as they say they will miss Peter. But Mrs darling explains all you have to do is use your imagination and they can see all their friends in Neverland anytime they want at this the rest of the stage lights up and all their friends are there we are magically transformed to Neverland and we sing a big happy song to end the show. 15. Musical Number – “Can’t Stay Young Forever”