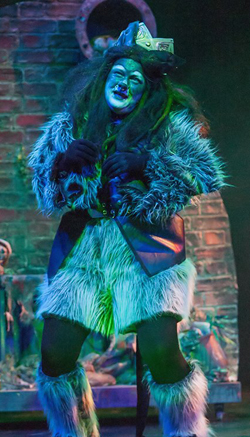 The show opens with a video projection it shows our hero Hans speaking directly to the audience. He introduces himself and begins to tell his story. Throughout the show he will be our narrator. He will have the ability to freeze a scene and talk to the audience.

He introduces the audience to all the characters and we see pictures of them on the screen. He tells us how Hamlin was once a lovely town but an evil Rat Queen in conjunction with a Piper had tried to get all the towns money. Our story begins with Hans telling us about the day he and his Mother came to Hamlin town to get work……….

After the narration the show opens with a big musical number and Hans talks to us, he tells us that his Mother Frau Kinderflapping has arrived in Hamlin to begin work as the Mayor’s Nanny to mind his three children. The first people they meet are the mayor’s Councillors Helmut Stinkinpopper and Herman Poopenhagen, then the Mayor’s oldest beautiful daughter Lena arrives with her little sister Andrea and brother Alex (who has a bad leg and needs a crutch for support). Hans immediately falls in love with Lena but she is not as enthusiastic. As this scene comes to a close Frau Kinderflapping is brought by the councillors to meet the Mayor.

Scene 3 – The Sewers under Hamlin Town.

The Rat Queen and her sidekicks Nibbles and Scratcher are angry and unhappy because they are hungry, poor and bored. Then a stranger appears to them, it is The Pied Piper, he only speaks in rhyme. He tells them that he can help them. If they work together they can all share Hamlin’s gold.

He tells the Rat Queen that she must rally all her rats and invest Hamlin and then when the people are sick of rats he will go to the Mayor and tell him that he can get rid of them by playing his pipe and the rats will be led away, he demonstrates this and the Rat Queen is delighted with the proposal. They seal the evil deal with a musical number.
(Suggestion – “Be Prepared” – From the Lion King)

Scene 4 – The Council Chambers of Hamlin.

In this scene we meet Mayor Borris Maxamillion. He and his councillors are at a meeting, there are the two councillors from earlier and about five more that may be recognisable to local audiences as councillors they may have seen before. (This scene in the script will require some re-writing and the characters will need to be changed to local politicians with local issues to be discussed, for best effect.) There is a funny council meeting getting lots of local humour in and after the meeting is over Frau Kinderflapping is introduced to the Mayor, she gets the job and the children are introduced to her.

The council chamber is suddenly invaded by rats. Nibbles and Scratcher enter and tell the Mayor that the rats are taking over. There are just so many rats that they can’t fight them. As the scene ends the Mayor and the others are thrown out of their chamber as the rats settle in.

Everyone is in the square which is also full of rats. Nobody knows what to do, when suddenly the Pied Piper appears. He tells the Mayor that he can get rid of the rats for a price. The Mayor and his councillors discuss it and decide to tell him to go ahead and get rid of the rats. The Piper plays his pipe and leads the Rats off down the aisle and out of sight.

There is much celebrating but then the Piper returns looking for his money. The Mayor refuses to pay the Piper the full amount but instead offers him a small bag of gold. The Piper is furious and warns him that if he does not pay then something terrible will happen. The Mayor laughs it off and walks away. The Piper begins to play a tune on his pipe and all the children of the village follow the music in a hypnotic fashion. The people are helpless and as the Act ends the children are led out through the audience leaving the people of Hamlin heartbroken and the Mayor regretting his actions.

As act two opens all the children of Hamlin are locked away in the sewers, the Rat Queen asks the Piper what the plan is now. The Piper explains that now he will go to the Mayor and demand a ransom for the children. If the Mayor wants to see the children again he must give them all of Hamlin’s gold.

Back in the village everyone is very upset, Frau Kinderflapping decides that since there are no children left then she is out of a job and she sets about getting herself a man. She starts flirting with Herman and Helmut but doesn’t get very far, she then moves onto the Mayor, but doesn’t get much further. Hans enters and tells his mother of his love for Lena who walks in and overhears him. She kisses him and a beautiful Panto romance is born. As the young couple sing a love song, the Piper, Nibbles and Scratcher sneak in and disturb the happy scene. The Piper tells Hans and Lena the deal and they leave. Hans and Lena tell the Mayor and it appears that they have no choice but to pay the ransom. Suddenly Andrea and Alex enter they escaped from the Piper as he led the children away because Alex fell behind because of his bad leg. They can now show the others where the children are. It is decided a clever plan is needed to free the children and that Helmut and Herman are the men to lead the rescue.

In the sewers the Queen Rat leaves Nibbles and Scratcher to guard the children. Suddenly Helmut and Herman enter, they are dressed in beautiful white top hats and tails, they flirt with the rats and do a dance of love!

During the dance the Mayor and Hans sneak in and release the children. After the song the Rat Queen and the Piper come in they realise the children are gone. The Rat Queen declares she will have revenge. They are all going to invade Hamlin and take it over for good.

The goodies prepare for battle. The rats attack and we have a big battle / chase scene. At the end of which the Piper appears and plays his pipe, everyone is hypnotised and he has control. Just when all seems lost Hans leads in a full marching band that drowns out the Piper and the spell is broken. The Rats retreat to the sewers.

Now that the Rats are gone everyone can get down to living happily ever after but not before we have the Panto sing song! – Musical Number – The Music Man – Sing along Song.

After the song there is a wrap up on video in which Hans and Lena tell us what happened to everyone.