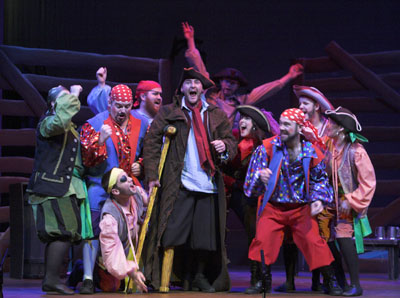 In 1883 when Robert Louis Stevenson published his most famous novel “Treasure Island” little did he expect that 100 and something years later his classic would be turned into what you are about to witness tonight.

That’s why we have fondly titled this panto – Treasure Island the “Pirate Copy” while we roughly kept to the original classic, we have added and subtracted a few characters, multiplied the whole thing by wackiness and dived it up with some lively musical numbers, now I’ve never been that good at maths but I think that it equals a great nights entertainment, that even Mr Stevenson would have to chuckle at.

Our story in short, not to be mistaken with the original which is a great read by the way, begins many, many years ago somewhere in the beautiful Carabbien.

An old pirate named Captain Flint has been leading a band of evil pirates they have been terrerising the high seas and have plundered a huge bounty of treasure. They sail to a hidden island to bury their treasure, as soon as it’s in the ground Flint turns on his crew killing them all bar one, Ben Gunn who escapes into the wilderness of the island. Flint then returns to the boat as he goes he draws up a treasure map of where the wealth is buried.

When Flint mysteriously dies some years later the map falls into the hands of Billy Bones another pirate who had befriended Flint along the way, but the legend of this buried bounty has become well known and every pirate in the land is on the look out for this map that will lead them to Old Flinty’s gold.

A pirate by the name of Long John Silver has taken a particular interest in this treasure and has devoted his life to searching for the map.

Billy Bones is now on the run from all the pirates who seek the map and he arrives at “The Admiral Binbow Tavern” where he meets a young boy who runs the tavern with his two aunties. This young man is Jim Hawkins and he is the hero of our story. Billy Bones takes unwell while staying over in the tavern and before he passes to Davy Jones Locker he gives the map to Jim telling him all about the treasure.

Young Jim having never been afraid of adventure immediately sets out to charter a ship and sail for the buried treasure, his two aunties, who would be less enthusiastic about treasure hunting, he tells that he is taking them on a cruise and so our adventure begins, and this is where our Panto takes it from.

On the docks Jim makes the mistake of telling two unusual characters about his quest these men turn out to be pirates who work for none other than Long John Silver and when they tell him about the map Long John formulates an evil plan to come on the quest and when the time is right pounce killing all and claiming the gold bounty for himself and his crew.

In the meantime Jim has recruited the services of Squire Trelawney who has a great fleet of ships and has given Jim “The Hispainola” a fine ship, which will be captained for the voyage by Captain Alexander Smollett and his first mate Samual Arrow.

The crew is assembled but onknown to all it is a crew of pirates in disguse led by the natourious Long John.

So the anchor is weighed (how much it weighs? I don’t know) and the ship set sails for what promises to be the adventure of a lifetime. Now shipmates sit back, relax and enjoy the voyage!